The Royal Regalia – the King’s and Queen’s Crown

The royal regalia are symbols of the king’s power and majesty, and of the monarchy as a form of government. The word “regalia” is derived from the Latin “Rex” meaning “worthy of a king”. The most important function of the regalia was associated with coronations, the formal investiture of the sovereign to his status as king. The first Norwegian king to be crowned was Magnus Erlingsson in 1163.

The original Norwegian regalia have been lost. They are mentioned in several sources including Sverre’s Saga, but the trail of their whereabouts ends in 1537. Legend has it that Norway’s last Roman Catholic archbishop, Olav Engelbrekston, took the King’s crown and sword of state with him when he fled the country following the Reformation. He died shortly after, and it is not known what became of the regalia.

During Norway’s union with Denmark, coronations of the Dano-Norwegian kings were held in Denmark. Consequently, when Carl Johan was preparing for his coronation in 1818 Norway did not have its own regalia. The king solved this problem by paying for the making of the essential items himself.

In 1908 the Storting amended the Constitution, abolishing the Article on coronation. Thus, the last king and queen to be crowned were King Haakon VII and Queen Maud. However, both the King’s Crown and the Queen’s Crown were placed on the high altar during the Service of Consecration and Blessing for King Harald and Queen Sonja in 1991. 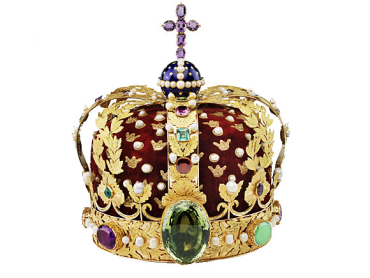 The word “crown” is derived from the Latin “corona” meaning wreath. Originating in Asia and adopted in Europe, the crown has been used as a symbol of power and majesty for several thousand years.

The Norwegian King’s Crown was made by the goldsmith Olof Wihlborg of Sweden. King Carl Johan commissioned and paid for the crown to be used in his own coronation in 1818. The crown has been used in the coronation of four kings and has played a prominent role in two consecration ceremonies.

Upon the death of a monarch, the crown is placed on the casket during the funeral service.

The King’s Crown consists of eight hoops rising up from the crown ring and joining in the middle under an orb of blue enamel with gold stars and a band of pearls. At the top rests a cross of six amethysts. Four of the hoops are flat and shaped like oak leaves. The four other hoops are filigreed and shaped like bay leaves.

In the middle of the crown ring is a large, green tourmaline, said to be a gift to the King from the Brazilian consul in Stockholm.

The cap of purple velvet is decorated with small crowns and 50 pearls.

The crown is made of 20-carat gold, pearls and assorted gemstones such as amethysts, opals, peridots, chrysophrases, topazes, tourmalines, sapphires and emeralds. 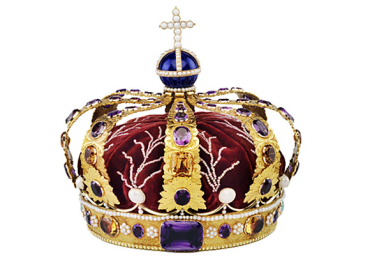 The Queen’s Crown was made for Queen Désirée in 1830, although it was first used in 1860 during the coronation of Queen Louise.

The Queen’s Crown consists of eight hoops that join at the top underneath an orb of blue enamel and a band and cross of pearls. Another band of pearls, 153 in all, line the upper edge of the crown.

The cap is sewn of purple velvet and is embellished with stylised flames embroidered with tiny pearls.

The central gemstone in the crown is a large amethyst.

The crown is made of silver with gold gilding and settings, and decorated with amethysts, citrines, chrysophrases, topazes and numerous pearls.