Home › Culture › History › What Brought the Black Death to Norway?

What Brought the Black Death to Norway? 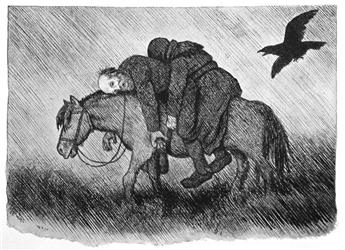 In February 1349, a British merchant ship docked in the Hanseatic City of Bergen. It carried a deadly stowaway: The Black Death. Two years later, about two-thirds of the population was killed. The general opinion has been that rats were carriers of the disease.

The infectious disease was carried by ships that sailed from England along the coast of northern Europe to Norway. The spreading speed in Western and Northern Europe was from 2/3 to 1 ½ kilometers per day (0.41 – 0.9 mi). The causes of the rapid and extensive spread has been discussed among scientists. There is no doubt that the medieval hygiene played a crucial role – or lack of hygiene: The streets were often filled with waste from both humans and animals and people often went without shoes. This meant that people easily got infections and the disease spread through food, clothing and body contact.

But, is it really the case that rats were the disease carriers? In recent years, considerable research has been done on the Black Death and several researchers are now in doubt whether rats transmitted the disease.On the basis of well-documented outbreaks of plague in England in the 1600s and another outbreak of bubonic plague in India in the early 1900s, several scientists believe that the Black Death may have been caused by an Ebola-like virus.

There are several reasons for doubting that the disease was spread by rats. The dispersion pattern is one: In just a few years, the plague spread throughout Europe. The outbreak of bubonic plague in India in the early 1900s took over six years to spread from one village to another. If this was the same disease, it is unlikely that the Black Death would spread so fast and so far at a time when people traveled significantly less than in the 1900s.

Another reason why the scientists are skeptical is the size of the rat population in the period when the plague ravaged. There is no doubt that there were lots of rats in the cities, – but in rural areas they only represented a minor problem: In the Middle Ages, pigeon breeders did put the nests directly on the ground. If the rats had been a problem, the nests would have been placed higher to protect the eggs.

Another example is from Norway: Food storage houses were placed directly on the ground. These buildings were not raised off the ground until the 1700s, and the reason was to keep rats and other rodents away. In the period of the Black Death, it appears that rodents were a minor problem which makes the “rat theory” less likely.

Whatever spread the disease, one thing is certain: The last known victim of the Black Death in Norway was the Bishop of Stavanger, Guttorm Paulson, who died January 7, 1350.