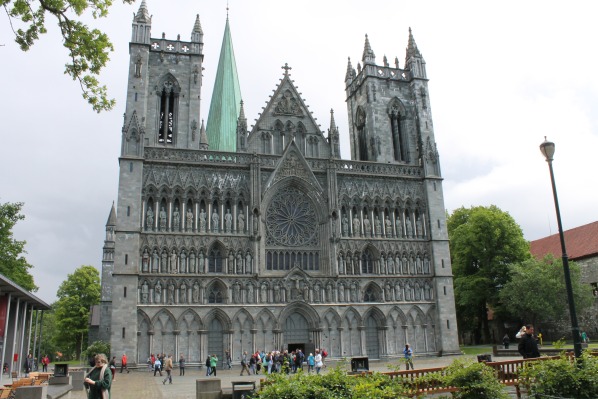 Norway’s national sanctuary, The Nidaros Cathedral, is built on the grave of Olaf the Holy, Norway’s patron saint. The construction started in 1070, but the oldest parts still in existence are from the middle of the 12th century. St. Olaf, Rex perpetuus Norvegiae, was killed in the Battle of Stiklestad on 29 July 1030.

Archbishop Eystein Erlandsson is regarded as the cathedral’s ‘great contractor’. In 1179, he had to flee the country and immigrated to England. The archbishop was inspired by the Gothic choir at the Canterbury Cathedral and in 1183, he returned to Norway with the desire to build the largest and most powerful Cathedral in Northern Europe.

Nidaros Cathedral is decorated with beautiful art work such as stone sculptures, stained glass windows, and iconic paintings. It is the only church in Norway which has a fully developed Gothic style.

The High Altar in the octagon is designed as a shrine and placed where St. Olaf was buried. The altar is a gift from King Oscar II who was crowned in the Cathedral in 1873.

‘Olavsfrontalet’ dates from the first half of the 1300’s. It shows the story of St. Olaf from the time of the Battle of Stiklestad in 1030. The art piece illustrates St. Olaf surrounded by smaller images. The top image on the left shows his dreams of the celestial ladder and the picture below illustrates St. Olaf giving money to a farmer to pray for the souls of the fallen enemies. The bottom image on the right shows St. Olaf stabbed to death by Tore Hund, and on the image above, King Olaf is declared holy.

Johanneskapellet (John the Baptist’s Chapel) is one of the oldest parts of the church. An inscription on the wall tells that the chapel was consecrated on 26 November 1161 in honor of John the Baptist and St. Sylvester. The altar is made of Italian marble by Harald Wårvik. It is decorated with a cross made of glass created by Wårvik in cooperation with the Norwegian glass company Hadeland Glassverk. 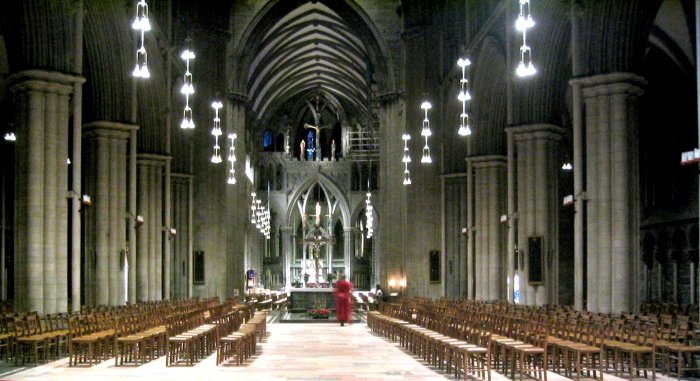 The Cross Altar in the eastern part of the church is patinated in bronze and made by Wenche Guldbransen. On top of the altar stands an 8.5 ft. high crucifix in silver. It is made by Wilhelm Rasmussen, and prepared by the Norwegian goldsmith company David-Andersen. The cross was a gift to the church from Norwegian immigrants to the United States in 1930, the 900th anniversary of the Battle of Stiklestad.

In 1930, the Cathedral received a Russian icon as a gift from Norwegian businessman R. Zeiner-Henriksen. It is called ‘Savior of the wet beard’ and shows Christ surrounded by a halo with a golden cross. The Savior’s face is framed by his dark hair with his eyes looking straight at the viewer. There are many indications that the icon was created in Novgorod, Russia, around the year 1500. 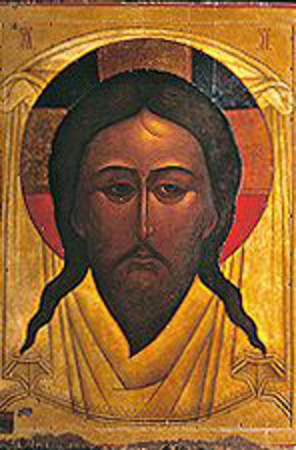 The stained glass windows were made by Gabriel Kielland in the period 1913-1934. The western window illustrates ‘doomsday’ because it is facing the sunset. On the north side we find the Virgin Mary with Child surrounded by ancestors and kings of the Old Testament. On the southern wall, the theme is ‘The Risen Christ’ surrounded by scenes from the Gospels.

The Cathedral’s western wall is the main façade with a total of 57 sculptures (Click on the second photo to enlarge and see all the details). The top row shows 18 kings and prophets of the Old Testament, including the prophets Isaiah and Ezekiel and King David. The second row includes sculptures of Norwegian saints, the Heavenly Virtues and the Annunciation. The bottom row shows the Crucifixion, the Apostles, evangelistic kings and saints among others.

See the full list and history of the sculptures here.

Religious myths tell that judgment day will occur when the last stone is placed on the cathedral. Therefore, the artists created a sculpture of a stone carver that holds the last stone in his hand. Thus, the last stone will never be placed and doomsday is avoided.