Land of the Midnight Sun 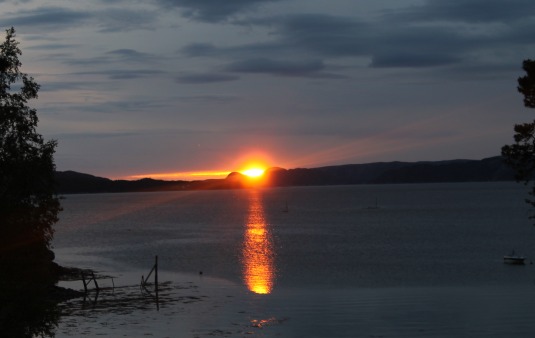 The number of days per year with potential midnight sun increases the farther poleward one goes from the equator. Although approximately defined by the polar circles, in practice midnight sun can be seen as much as 90 km (56 miles) beyond the polar circle, because the sun is a disk and not a point, and the exact latitudes of the farthest reaches of midnight sun depend on topography and vary slightly year-to-year.

There are no permanent human settlements south of the Antarctic Circle, so the countries and territories whose populations experience it are limited to the ones crossed by the Arctic Circle, e.g. Norway, Canada (Yukon, Northwest Territories, and Nunavut), Denmark (Greenland), Finland, Sápmi, Russia, Sweden, the United States (Alaska), and extremities of Iceland. In Svalbard, Norway, the northernmost inhabited region of Europe, there is no sunset from approximately April 19th to August 23rd. The extreme sites are the poles where the sun can be continuously visible for a half year.

The opposite phenomenon, polar night, occurs in winter when the sun stays below the horizon throughout the day.

Many Norwegians can experience the midnight sun. The reason is the warm Gulf Stream that makes it possible to live north of the Arctic Circle. The picture was taken on June 22nd at 11:51 p.m. on Otterøya, North-Trøndelag County.

When can I experience the midnight sun in Norway?