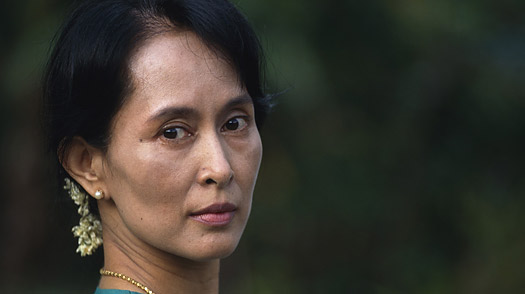 Suu Kyi will arrive in Oslo on June 15th to participate in a press conference with the Norwegian Prime Minister, Jens Stoltenberg. On Saturday, she will make a speech in Oslo City Hall, a speech she was not able to make when she was awarded the prize in 1991.

The Nobel Peace Prize Committee writes on their web-page:

The Norwegian Nobel Committee has decided to award the Nobel Peace Prize for 1991 to Aung San Suu Kyi of Myanmar (Burma) for her non-violent struggle for democracy and human rights.

Aung San Suu Kyi is the daughter of Burma’s liberation leader Aung San and showed an early interest in Gandhi’s philosophy of non-violent protest. After having long refrained from political activity, she became involved in “the second struggle for national independence” in Myanmar in 1988. She became the leader of a democratic opposition which employs non-violent means to resist a regime characterized by brutality. She also emphasizes the need for conciliation between the sharply divided regions and ethnic groups in her country. The election held in May 1990 resulted in a conclusive victory for the opposition. The regime ignored the election results. Suu Kyi refused to leave the country and since then, she has been kept under strict house arrest.

Suu Kyi’s struggle is one of the most extraordinary examples of civil courage in Asia in recent decades. She has become an important symbol in the struggle against oppression.

In awarding the Nobel Peace Prize for 1991 to Aung San Suu Kyi, the Norwegian Nobel Committee wishes to honour this woman for her unflagging efforts and to show its support for the many people throughout the world who are striving to attain democracy, human rights and ethnic conciliation by peaceful means.

On June 18th, U2 vocalist Bono will arrive in Oslo to accompany Aung San Suu Kyi. Thereafter, they will travel to Ireland where she will attend the free concert ‘Electric Burma’ and receive a price from Amnesty International.