Unveiling of the Ibsen Bust at the Ibsen Museum in Oslo 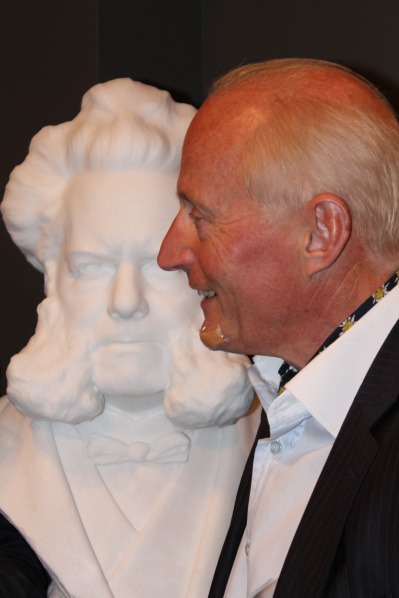 Norway’s, and one of the world’s foremost playwrights, Henrik Ibsen, was on Monday June 4 the object of a formal unveiling of a marble bust at the Ibsen Museum in Oslo. ThorNews was present at the arrangement along with several Norwegian cultural personalities.

The bust of Ibsen is made by one of the best classical sculptors in Norway, Håkon Anton Fagerås, who also has been responsible for monuments of polar explorers Fridtjof Nansen and Roald Amundsen. The bust is made from Italian marble and is of a very high quality. ‘Within the sculptor’s artistic expression, Ibsen is portrayed with depth, authority and a portrait likeness. Through his classic traditional expression, Fagerås has captured Ibsen’s inner and outer nature. A solid craftsmanship is the basis of Fagerås’ art’, according to a statement from the initiator and organizer, KulturKonsept by Kristin Jordfald. She has been the organizer of several cultural events in Norway and is a passionate communicator of Norwegian culture. ‘I take every opportunity I get to convey art, culture and to communicate its vital necessity. Art and culture is first and foremost about heart beats ‘, Jordfald says on the occasion of the unveiling.

A bust has been greatly desired at the Ibsen Museum, and finally, Norwegians and international audience have the opportunity to see this magnificent ‘3-D portrait’ of Henrik Ibsen.

The C. Ludens Ringnes foundation, by Christian Ringnes, funded the bust as a gift to the Ibsen Museum. When ThorNews asked why Ringnes would fund this particular project, he replied:

‘I decide very quickly when I receive such requests, not at least when it comes to those projects I refuse. When it comes to this particular project, I accepted immediately. The reason is that the Ibsen Museum has been run by enthusiasts and private interests. Now, the Norwegian State partially provides the finances. I am very pleased with the bust and its expression, and I think the artist has been very brave…’

The sculptor, Håkon Anton Fagerås, told ThorNews that he is very pleased with the result.

Henrik Ibsen’s last home, where he lived the last 11 years of his life, constitutes the core of the Ibsen Museum. The apartment re-captures Ibsen’s home, including the writer’s own furniture and fixtures, original color and decoration. At the moment, the museum shows the exhibition “Henrik Ibsen – on the Contrary,” which deals with the playwright’s life and poetry.

Head of Arts Council Norway, Anne Aasheim, accounted for the unveiling and said in her speech that it is ‘impressive what enthusiasts, but also the public, have accomplished during the last 15-20 years. Today, the reconstructed apartment is considered a full-fledged museum in Oslo.’

Henrik Ibsen – on the Contrary” is also the title of the exhibition which now starts in the reception and fills the entire apartment neighboring Ibsen´s former home. The topics of the exhibition range from the purely personal, to Ibsen as a man of the theatre, to social issues, connecting the threads both in terms of cultural history and the history of ideas to the period in which he lived. The exhibition also wish to highlight the current relevance of the issues and to incite reflection on the part of the public over own life situation and the world we live in.

ThorNews highly recommends our readers who want to visit Norway to visit the Ibsen Museum.

Photos show from the top:

1) Christian Ringnes in front of the Ibsen bust

3) The sculptor in action from his workshop in Pietrasanta, Italy