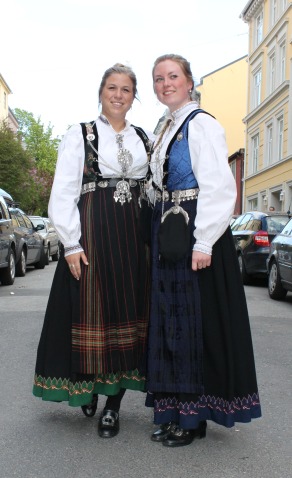 The female Bunad from Sogn is based upon local, traditional costumes from the 1800’s. It is a reconstructed Bunad with inspiration from local nature and culture.

In the 1920’s, Klara Semb and Anna Knudsen started collecting information about the local clothing customs from Sogn. Both of them were concerned that the area did not have its own costume, and through their findings they created the basis for a Bunad that Olga Berge constructed in the late 1940’s: The Sognebunad.

The vest is called ‘aoliv’. The materials and colors have varied considerably through the times. Today, the material is a type of brocade made from viscose or silk damask with silver thread patterns. The most common colors today are black, red or yellow, but it is also available in several other colors.

The Sognebunad offers two different skirt types: folded or wrinkled skirt, both made from black wool. Surrounding the bottom of the skirt is a decorative two-colored border. Some oral sources say that the border patterns symbolize the sea waves and mountain range from the area.

The Sognebunad is decorated with an apron, originally made from silk but because of poor access to silk, they started to make them in cotton and wool. Some of them have a black base color and vertical stripes, with horizontal stripes at the bottom while others resemble the material from the brocade vest. The colors may vary.

The bag is made either from the same fabric as the vest or the skirt, and it is common to use black stockings.