Archaeological excavations indicate that the first settlement in this area started as early as the 10th century, and is therefore the oldest city neighborhood in Oslo today. Gamlebyen was established with a larger urban structure around year 1000 and became the Norwegian capital in 1314.

Gamlebyen is known for its many stone ruins above ground level as well as large amounts of protected cultural ruins beneath the surface. The area also has numerous protected 18th and 19th century buildings as well as heritage railway buildings from different eras.

In the 12th century, the old town was divided into two districts, each with its own parish church: The southern district of Clemenskirken (Clemens Church), and the northern district of Korskirken (The Cross Church). The unifying center for the two parishes was the Oslo square. King Magnus Lagabøte’s city law said that ‘in the markets, people can sell anything they want’. Farmers who did not have a ‘steady merchant’ came to the market with their goods. They sold butter, cheese, vegetables, fruits, berries, fish, meat, live animals, leather, textiles, moss for toilet paper, and wood and iron supplies. The Oslo square was also home of the city’s first cathedral that was built in the early 1100s, The Halvard Cathedral, which became a popular landmark. Besides being the diocese and religious center of eastern Norway for about 500 years, the cathedral was the coronation church, royal wedding church, and one of Scandinavia’s most visited places of pilgrimage.

After the great city fire of 1624, the new settlement was established next to Akershus Fortress and the fire ruins was cleared and made available to rural areas. People of lower class continued living in Gamlebyen, along with the very patriotic or just stubborn inhabitants. 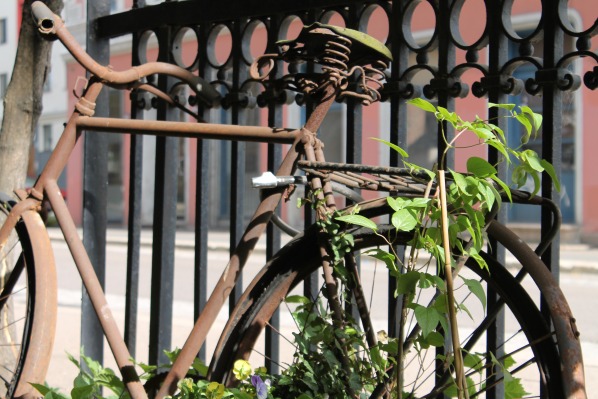 Today, Gamlebyen is a favorite place for historical walks and sights.

Oslo Medieval Festival (June 15 – 16 2013) arranges an annual market in Ruin Park with music, dance, and foods from traditional medieval culture. The park is also home of one of the largest music festivals in Norway, Øyafestivalen (August 7-11), which combines the old, historical Oslo with contemporary urban life.

Drawing of the Oslo square by Karl Fredrik Keller