The Oslo Tramway (Norwegian: Oslotrikken) is a 131.4-kilometre (81.6 mi) tramway in Oslo, Norway which consists of six lines with 99 stops and has a daily ridership of 110,000. It is operated by Oslo Sporvognsdrift, a subsidiary of the municipal owned Kollektivtransportproduksjon who maintain the track and 72 tram vehicles on contracts with the public transport authority Ruter.

The first tram in Oslo was opened in 1875 with a short line between Homansbyen west of the city centre, Oslo West Railway Station and a sideline to Grønland, east of the city centre. The first “trams” were in fact horse drawn vehicles on flanged steel wheels. The first expansion of the line came in 1878 with a line to the Grünerløkka neighborhood to the north.

Electric tram service was initiated in 1894 with a line over Briskeby to Majorstuen, a route south of the original Homansbyen line. Horsedrawn service was entirely replaced with electric service in 1900.

Most of the tram lines in Oslo go near the downtown area, and all the lines on the system go either through downtown, or, more rarely, terminate there. As of 2005 there are six lines, all of which operate daily, usually on a schedule with a 10-minute headway, or 20-minute schedule during late evenings and weekends. The entire network is 131.4 km long. Many stretches are operated by two or more lines. In central areas, served by more than one line, there is a maximum of 5-minute headway between trams, a concept named ‘Rullende fortau’ (rolling sidewalk) by the tram company. 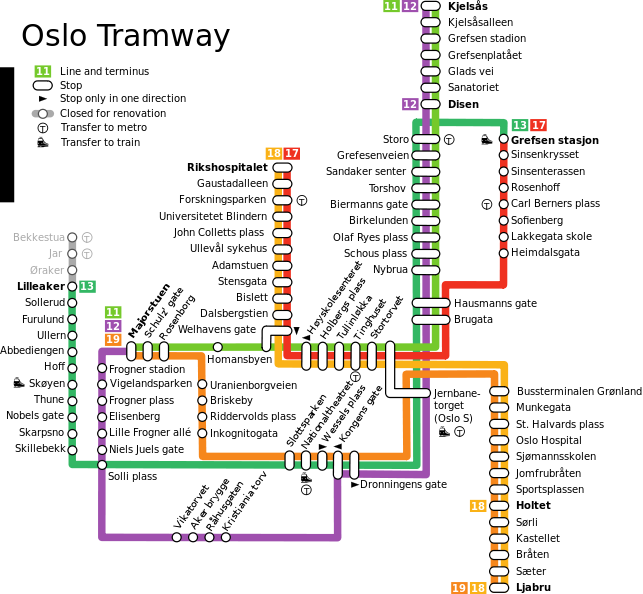 The lines are color coded, and the colors appear on the line map as well as destination signs (but not any more on the SL-79 trams since they have digital destination displays). Line 11 and 13 share colors, as do lines 18 and 19.

If you are visiting Oslo for the first time, ThorNews would recommend Line no. 12 that stops next to Oslo City Hall, Aker Brygge, Nobel Peace Center, The Vigeland Park and the Majorstuen area that is worthwhile to visit. The tram is an environmentally friendly and cheap alternative, and a 24 hour ticket ‘only’ costs about 12.5 dollars.

Like Loading...
‹ Helle Knives – Quality Craftsmanship Since 1932
‘Lonely Planet’ legend: These are the Five Best Places in Norway ›