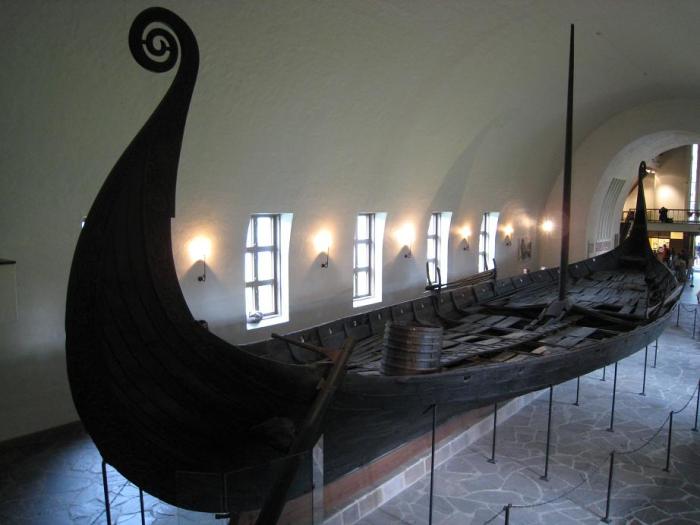 The Oseberg ship, a well-preserved Viking ship discovered in a large burial mound at the Oseberg farm near Tønsberg in Vestfold county, (Photo: norskevaapen.no)

Norse funerals, or the burial customs of Viking Age Norsemen (early medieval Scandinavians), are known both from archeology and from historical accounts such as the Icelandic sagas, Old Norse poetry, and notably from the account of Arab Muslim writer Ahmad ibn Fadlan.

Throughout Scandinavia, there are many remaining burial mounds in honour of Viking kings and chieftains, in addition to runestones and other memorials. Some of the most notable of them are at the Borre mound cemetery in Norway, and Lindholm Høje and Jelling in Denmark.

A prominent tradition is that the ship burial, where the deceased was laid in a boat, or a stone ship, and given grave offerings in accordance with his earthly status and profession, sometimes including sacrificed slaves. Afterwards, piles of stone and soil were usually laid on top of the remains in order to create a burial mound.

It was common to leave gifts with the deceased. Both men and women received grave goods, even if the corpse was to be burnt on a pyre. A Norseman could also be buried with a loved one or slave (Norwegian: trell), who was buried alive with the person, or in a funeral pyre. The amount and the value of the goods depended on which social group the dead person came from. It was important to bury the dead in the right way so that he could join the afterlife with the same social standing that he had had in life, and to avoid becoming a homeless soul that wandered eternally.

A 10th century Arab Muslim writer named Ahmad ibn Fadlan produced a description of a funeral of a Scandinavian, Swedish, chieftain who was on an expedition on the eastern route. The account is a unique source on the ceremonies surrounding the Viking funeral, of a chieftain.

The dead chieftain was put in a temporary grave which was covered for ten days until they had sewn new clothes for him. One of his thrall women volunteered to join him in the afterlife and she was guarded day and night, being given a great amount of intoxicating drinks while she sang happily. When the time had arrived for cremation, they pulled his longship ashore and put it on a platform of wood, and they made a bed for the dead chieftain on the ship. Thereafter, an old woman referred to as the “Angel of Death” put cushions on the bed. She was responsible for the ritual. Then they disinterred the chieftain and gave him new clothes. In his grave, he received intoxicating drinks, fruits and a stringed instrument. The chieftain was put into his bed with all his weapons and grave offerings around him. Then they had two horses run themselves sweaty, cut them to pieces, and threw the meat into the ship. Finally, they sacrificed a hen and a cock.

Meanwhile, the thrall girl went from one tent to the other and had sexual intercourse with the men. Every man told her “tell your master that I did this because of my love to him”. While in the afternoon, they moved the thrall girl to something that looked like a door frame, where she was lifted on the palms of the men three times. Every time, the girl told of what she saw. The first time, she saw her father and mother, the second time, she saw all her relatives, and the third time she saw her master in the afterworld. There, it was green and beautiful and together with him, she saw men and young boys. She saw that her master beckoned for her. By using intoxicating drinks, they thought to put the thrall girl in an ecstatic trance that made her psychic and through the symbolic action with the door frame, she would then see into the realm of the dead. The same ritual also appears in the Icelandic short story Völsa þáttr where two pagan Norwegian men lift the lady of the household over a door frame to help her look into the otherworld. 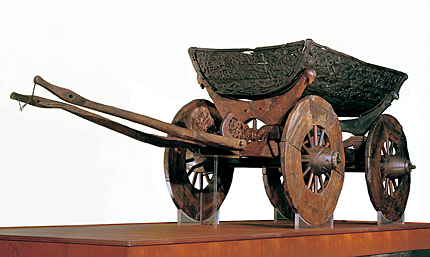 Thereafter, the thrall girl was taken away to the ship. She removed her bracelets and gave them to the old woman. Thereafter she removed her finger rings and gave them to the old woman’s daughters, who had guarded her. Then they took her aboard the ship, but they did not allow her to enter the tent where the dead chieftain lay. The girl received several vessels of intoxicating drinks and she sang and bade her friends farewell.

Then the girl was pulled into the tent and the men started to beat on the shields so her screams could not be heard. Six men entered into the tent to have intercourse with the girl, after which they put her onto her master’s bed. Two men grabbed her hands and two men her wrists. The angel of death put a rope around her neck and while two men pulled the rope, the old woman stabbed the girl between her ribs with a knife. Thereafter, the relatives of the dead chieftain arrived with a burning torch and set the ship aflame. It is said that the fire facilitates the voyage to the realm of the dead, but unfortunately, the account does not tell to which realm the deceased was to go.

Afterwards, a round barrow was built over the ashes and in the center of the mound they erected a staff of birch wood, where they carved the names of the dead chieftain and his king. Then they departed in their ships.

Editor*s note: Bottom photo shows the ‘Wagon’ from the Oseberg burial mound and is the only one of its kind in Norway. It was already old when it was placed in the mound, and probably made before the year 800 AD. Photo: The Museum of Cultural History, Oslo.

The Oseberg ship and ‘the Wagon’ are both displayed at the Viking Ship Museum in Oslo.