For nearly 20 years, Gourmet Chef Eirik Bræk has provided Norwegians and tourists the most delicious delicacies that Norway has to offer.

Downtown urban Oslo, just across the street from Oslo City Hall, ‘Fenaknoken’ is located. The shop is a culinary journey through Norwegian food traditions. From the ceiling hang cured meats, dried fish and sausages based upon old Norwegian conservation methods.

For over a thousand years, Norwegians have established their own food traditions through curing, salting and drying of raw materials. Before modern household technology was invented, this was the only way one could preserve food for years without rotting. The Norwegian clergyman and national poet Petter Dass (1647-1707), wrote an ode to the Norwegian food culture. This extract is translated from old Norwegian and it sounds like this:

Owner of Fenaknoken, Eirik Bræk, is a well-educated chef and has worked in restaurants in Japan and U.S., where he worked in the Norwegian Pavilion at the EPCOT Center in Orlando, Florida. Since 1996, he and his father, Gudbrand Bræk, have been in charge of providing traditional Norwegian quality food to the public. Mr. Bræk is originally from Kviteseid in Telemark County, and has a strong affiliation to the local food culture. 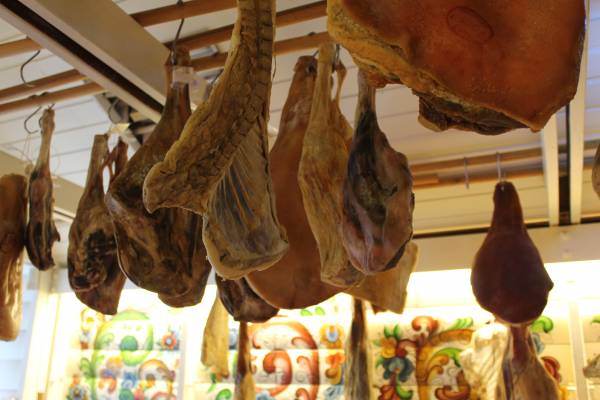 It is a true experience to pay a visit to his store. Eirik Bræk is genuinely interested in providing the best products and has an aim to ‘preserve traditions and convey Norwegian culture’, as he puts it himself. And we totally agree. These days, it is not too often that you meet such dedicated merchants and gourmets.

Fenaknoken is divided into three departments: One part is a ‘Costal Section’, the second a ‘Rural Section’ and the third a ‘Ham Section’ with meat products hanging from the ceiling. Through the rose-painted log walls you go straight into the Norwegian 1800s. And if there is any product you are curious about, you get qualified answers and historical background from the owner himself.

The food selection is one of the best in Norway. Here you can find dried moose, dried reindeer, reindeer hearts, dried fish, sausages, dried lamb ribs and legs, cheese and many other delicacies. And if you need further inspiration, Eirik Bræk has a keen ‘culinary eye’.
‘To cut a ‘Fenalår’ (dried lamb’s leg), you have to think that its shape is similar to Norway. Always start to carve in Central-Norway and move down the West Coast. Then you’ll get the best cut.’ Eirik Bræk shows how to do it and treat the Fenalår as a valuable musical instrument. He is a true craftsman.

He tells that they mostly sell ham, Pinnekjøtt (dried lamb ribs) and Fenalår. These are very popular products and many people buy them as gifts – they are considered top-class both in Norway and abroad. Another specialty is Villsau (wild sheep). It origins from the Viking era and is a robust sheep that has a different diet from ‘normal’ sheep.  Villsau eats heather and seaweed, and the meat gets a distinctive taste of wilderness.
The Norwegian cheeses are also a ‘delight for the palate’. Even in cheese making, the old Norwegian traditions are preserved. Fenaknoken has a wide variety of white and brown cheese – both soft and firm.
Fenaknoken wants to be a ‘melting pot for Norwegian food culture and to show that the Norwegian food industry and culture are close connected’. If you are a visitor to Norway and Oslo, ThorNews recommends a visit to Fenaknoken. You will hopefully bring back great memories and knowledge about Norwegian culture, as well as ‘the real taste of Norway’.