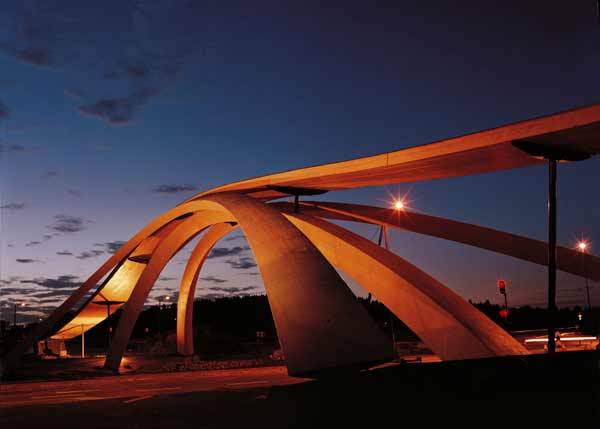 In 1501, Leonardo da Vinci designed a bridge to span the Golden Horn inlet between present-day Istanbul and Pera, Turkey. The bridge plan was part of a larger public works project presented to Sultan Bejazet II in 1502.

Many of da Vinci’s concepts were hundreds of years ahead of their time, and this bridge is a perfect example of that: Variously known as the “Golden Horn Bridge” or “Queen of Bridges”, he designed a bridge with the then unprecedented span of 720 feet (240 meters), using pressed-bow construction methods that would not come into common use for another 300 years. Consequently, because the bridge was too advanced for the builders of that time, it could not be constructed.

For centuries, the Golden Horn Bridge seemed destined to remain as a concept and never a completed project. About 500 years later, the Norwegian artist Vebjorn Sand saw a sketch of the bridge at a museum exhibiting da Vinci’s architectural and engineering ideas. Sand was the perfect person to resurrect the Golden Horn Bridge project because, besides being a respected painter, he also is acclaimed for his gigantic public art installations. His former works include the Kepler Star installed on the northern and southern side of Oslo Airport Gardemoen, and his spectacular installation “Trollslottet” (Troll Castle), an outdoor exhibition of paintings from his expeditions to Antarctica; it attracted the largest audience for a contemporary artist’s exhibit in Norwegian history.

The da Vinci Bridge is located just outside Oslo and is a pedestrian footbridge. Mr. Sand envisioned the Bridge as a global public art project whereby the da Vinci design was re-imagined to suit individual communities by using local materials. In collaboration with local artisans the installation would be constructed on every continent on earth.

The Leonardo Bridge has become a national landmark in Norway.