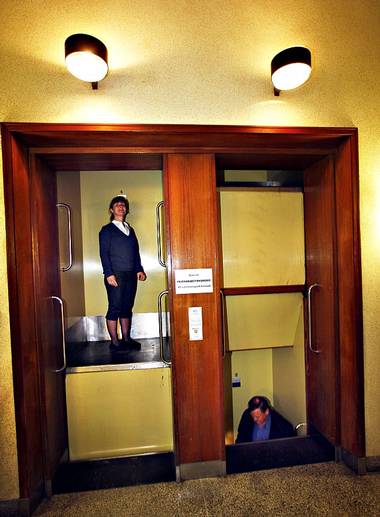 Just a number of people know about this peculiar invention inside one of Oslo’s many public buildings. There are not many remaining devices of its kind left in the world today. It’s as simple as an elevator. Not just an ordinary elevator but a ‘non-stop’ elevator also called a Paternoster elevator.

With its ‘Paris wheel’ principles, you’ll never have to wait for your turn. There are no doors and no buttons to maneuver – you just walk right into a booth and jump right out when you reach your floor. With the principle of a ‘Paris wheel’ you can take a round-tour without being trapped between two floors. Some mental focus is definitely needed when stepping into and out of the elevator, but after a couple of tries, you will have broken the code.

The name ‘Paternoster’, origins from the first two words of the Lord’s Prayer and means ‘Our Father’ in Latin, and its physical function is inspired by the rosary bean chains that form a perpetual circulation.

The other Paternoster elevators can be found in European cities in England, Germany and Austria, among other countries

A German film crew made a short film about the Paternoster with the metaphor of the ‘ups and downs’ in life – see it here.

Like Loading...
‹ Six of Seven Norwegian Dog Breeds in Danger of Extinction
The Book Boat Epos – A Floating Library ›