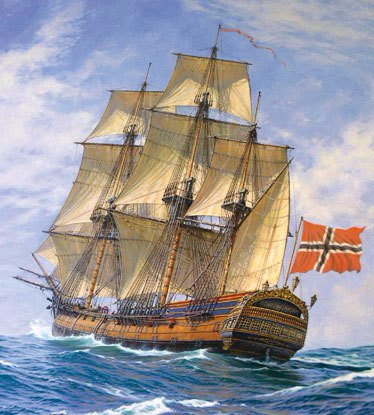 Aquavit is a traditional flavored Scandinavian spirits, but Norwegians produce a very special kind called “Linie” (English: Line) Aquavit, in this case referring to the equator.

However, the most fascinating about Linie Aquavit, is the exciting story behind the product.

Heinrich Meincke, a trading manager and his sister, Catharina Meincke, commissioned a brig named Trondhjems Prøve in 1798. In 1805, the boat was loaded with stockfish, hams, cheeses and what was otherwise considered to be of interest in Batavia (Indonesia). On board was a cargo of five casks of Norwegian aqua vita.

The captain failed to sell his cargo of spirit. Drinking customs and taste were different in Batavia, with rum and arak distilled from coconut milk as the staple drinks. Home again in Trondheim in December 1807 the barrel bungs were extracted and the goods sampled once again. The changing conditions inside the oak barrels had had a marked impact on the spirit – thus the principle behind linie aquavit was established.

In 1821, Jørgen B. Lysholm founded a distillery at Lysholms Minde, near Trondheim. The works were later relocated in the city. In the late 1830s the direct export of dried cod to Rio de Janiero and other South American markets was started. Batches of aquavit stored in oak barrels were regularly stowed on board. Lysholm Linie soon became the company’s leading product and bestseller. 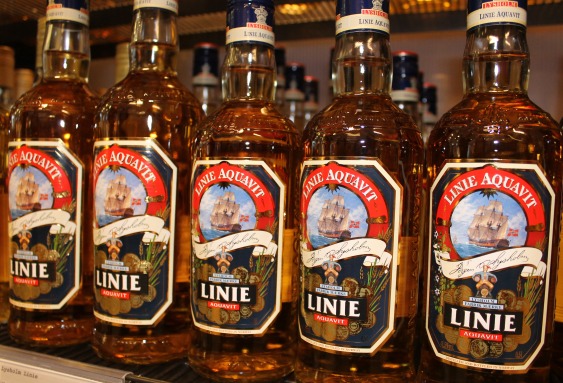 Although sailing ships are now a thing of the past, Linie still crosses the equator twice. Every month fresh batches of matured oak barrels depart on a 19-week passage visiting more than thirty-five countries. The equator is crossed twice and it is always a ship from Wilhelmsen that is used for the freight.

The aquavit, which has a 60 per cent alcohol content, is stored in oak barrels on deck in containers. During the passage, fluctuations in temperature and humidity influence the maturing process, while the constant motion of the sea swirls the aquavit round in the barrels. More than one thousand barrels of Linie are at any given time maturing as deck cargo on the world’s oceans.

Each bottle of Linie aquavit carries a description of its worldwide sailing route via Australia on the rear side of the label, stating the departure and arrival dates. Each drop of Linie harnesses memories of the sea passage. The maturing process is vital and starts with the import of 500-liter oak sherry barrels from Jerez.

The barrels were previously used for producing oloroso sherry for ten to fifteen years. The barrels give the aquavit its golden color; the residual matter from sherry provides a pleasant sweetness, and the white American or Spanish oak adds tones of wood and vanilla.