It all started when Inger Rosenfeld got a half-blind cow as a 50th birthday gift, built a dairy, and learned to make cheese. Today, we produce 50 tons of cheese a year.

The cheeses were first tried out in France where they were very well received. Since then, they have been well received by quality-conscious consumers in Norway, the United States and abroad.

3 selected cheeses from The Blind Cow

Inger’s Blue is a hand-made blue cheese of the Bleu dee Bresse type with a white mold surface.

This is a blue cheese with a distinctive flavor that appeals to the taste-conscious consumer. Inger’s Blue has gained a foothold in the French cheese market and is a popular cheese in restaurants and among cheese lovers in Norway.
In the autumn of 2008, Inger’s Blue was voted best blue cheese in Käseiaden (The Cheese Olympics) in Austria, in competition with cheeses from around the world.

Hunting Cheese is a new type of cheese that was made upon request from an American importer. They wanted a cheese with a “taste of Norwegian nature.” The “all-Norwegian” flavor has been achieved by adding whole juniper berries in a cheese of  Swiss-type (produced in pasteurized milk). The cheese is normally sold when it has matured for more than 3 months. The cheese gets a more powerful flavor the longer it matures.

Hunting Cheese was in the fall of 2009 voted ‘Product of Oslo’ in the Taste of Norway competition.

Several times, Hunting Cheese has also been selected as an ingredient in dinners held by the Norwegian Royal Family during their state visits around the world, when ‘real Norwegian food’ is served. 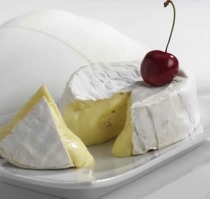 Camenås is a handmade Camembert cheese. It has a well-developed, fine and aromatic white mold surface, and ripened curd with a fruity taste.

This is the cheese we became known for – after the cheese won the silver medal at the prestigious food fair Fancy Food Show in New York in the summer of 2003 (in competition with 3500 other food products from around the world!

The cheese develops in flavor with time. Choose your favorite flavor!