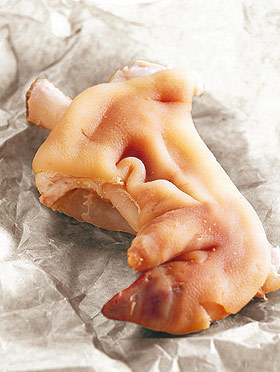 Syltelabb is a Norwegian traditional dish, usually eaten around and before Christmas time, made from boiled, salt-cured pig’s trotter. They are traditionally eaten using one’s fingers, as a snack food. They are sometimes served with beetroot, mustard and fresh bread or with lefse or flatbread. Historically syltelabb is served with the traditional Norwegian juleøl (English: Christmas Ale), beer and liquor (like aquavit). This is because Syltelabb is very salty food. The Norwegian word syltelabb, consists of the two words sylte and labb. Sylte means pickled. The word labb means pig feet or paw.

Place the pig’s feet in cold water for 24 hours. Scald with hot water and scrape well. Place over the fire in cold, salted water. Add the baking soda. Skim and cook until tender or until the flesh is easily pierced. Remove and let cool in cold water.

When entirely cold, cut lengthwise and lay in a brine of salt and water. If they lie in the brine too long, they become too salty and must be placed in a mixture of milk and water for a couple of hours before serving. The milk helps to draw out the salt as well as make them white. Serve with vinegar, pepper and beets.

They may also be served warm, in which case they are dipped in egg and bread crumbs and fried to a golden brown in butter. Serve with potatoes and apple sauce or truffle sauce.

Like Loading...
‹ ‘Home for Christmas’ – a Movie by Bent Hamer
Travel Along With ‘Hurtigruten’ – Minute by Minute ›